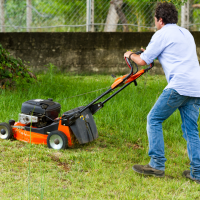 What’s Up With Electric Lawnmowers?

Maintaining your lawn is one of the summer’s big tasks. Depending on the size of your property, this could require just a few quick loops with a push mower, or it could take a good part of the day on a riding mower. Even homeowners who just use a small lawnmower are starting to feel the sting of rising gas prices, though, and those who want to leave the Earth a little greener may balk at how much added gas they use during the summer just keeping up with their lawn.

There is an alternative to traditional gas-powered lawnmowers, though: electric lawnmowers. Far from being a new fad, the first electric lawnmowers saw widespread use in the 1950s. They have a long (but not always glorious) history with homeowners, but are they worth considering today?

One of the big differences is in the physical size of the mower. Electric mowers tend to be smaller physically, even when they feature similar cut sizes to gas mowers. This is because an electric mower’s motor is lighter than a gas motor engine, and can be secured with a less sturdy, lighter frame. The smaller size can also allow electric lawnmowers to fit into tighter spaces than bigger gas-powered mowers, especially if the electric mower is a chuteless mulching mower. The blade speed may be slower than that of a gas-powered mower as well, though it is still capable of cutting grass at the slightly slower rotation. This can lead to some smaller electric mowers having issues with thick grass, however.

There are a few different types of electric lawnmowers, though the primary difference between them can be summed up as corded mowers versus cordless options. Corded mowers are what people typically picture when they think of electric lawnmowers: You plug them in with an extension cord and that electrical cord provides power for the mower while it’s in use. This is typically used for smaller yards so that the user isn’t dragging a big extension cord all over the place, and these mowers tend to be (but aren’t always) smaller in size with a smaller cut size than other mowers.

Cordless electric mowers feature onboard batteries that are charged beforehand and function much more closely to traditional lawnmowers. There is no extension cord to drag around, and these mowers can appear in both push and riding forms. In most cases the batteries are built into the mower and are plugged in to recharge, though some mowers (especially riding mowers) feature removable batteries that can be swapped out and charged in dedicated chargers as well.

Is an Electric Lawnmower Right for You?

Electric mowers aren’t right for every yard, though they can meet a wide range of needs depending on the layout of your property. Some electric mowers tend to get a bit pricey, but they feature modern technology and rapid charging which can make a big difference. For those wanting to cut out even more gas, these mowers can be paired with battery-swappable electric trimmers and other lawn maintenance tools as well.

If your primary goal with getting an electric mower is to try and cut out gas costs, you might also consider hiring a landscaping service to maintain your lawn for you. In most cases this will be for a flat rate each month, so you don’t have to worry about sticker shock at the pump or finding time in your week to cut down the grass again.