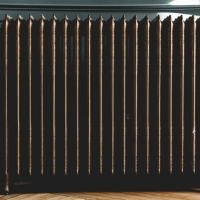 How Does a Radiator System Work?

Keeping the climate in your home under control is important throughout the year. Not only do you need to have a reliable way to keep the heat of the summer sun at bay, but you’ll also want some method of keeping toasty and warm on cool autumn evenings and throughout the frigid winter. For many homeowners, this means a forced-air heat pump, usually as part of a combined central heating and cooling system. This isn’t the only option that’s available, however.

The function of a radiator system is pretty simple: heat travels through the system, warming up the radiator. The heat then radiates out into the open air, creating natural circulation of the air in the room. As more heat enters the air, the warmer air rises toward the ceiling and cooler air drops down closer to the floor. This air is in turn heated up by the radiator, causing it to rise, cycling heat throughout the room. After a little time has passed, the entire room will be warmed up without the noise and dust or allergen circulation that forced-air units often cause.

The old type of radiator that you’re likely most familiar with are steam radiators, which function by pumping in steam that’s heated elsewhere in a boiler. The steam heats up the radiator, and as it cools it condenses into water which drains and returns to the boiler. While this was a functional system, the pressure created by the steam could sometimes cause radiator units to rupture or create other hazards. That’s part of the reason that these radiators have kind of fallen out of favor in modern times.

More modern radiator systems use hot water instead of steam to transfer heat, as this can be done without creating potentially dangerous pressure build-ups. Heated water enters the radiator, cycles through the loops to transfer its heat, and then cooler water leaves through another valve. The water is then reheated and cycles back through the radiator so that it can continue to heat the room. What pressure might build up in the form of air within the water lines is released through bleed valves that are mounted on the radiator units themselves.

Is Radiator Heat Right for Your Home?

While radiators aren’t right for everyone, they do provide quality heat without the added noise of forced-air systems. Many homeowners consider radiator heat to be less dry overall than forced-air heating, and the heat that radiators provide can last for a while even when the radiator isn’t operating due to the more gradual heat release that they use. They do take a while to get going, however, so they aren’t ideal for those who want to be able to turn on the heat and immediately see the mercury start to rise.